When I told people I chose to study abroad in Belgium I got a lot of puzzling looks.  Why not France? You speak French. After looking at the course options, I realized that France was not the program location for me and I had dreams to study near the Heart of the European Union!  I have always thought of Belgium as a good fit for me and I have friends who live not too far from Brussels.  Belgium is also a very central location for those who love to travel.  It is so easy to get a lot of places (Amsterdam, Oslo, Athens oh my!).  Aside from the great location, Brussels is also very political, and have you heard about the food?! The Huffington Post posted an article about the 13 Foods that’ll make you want to visit Belgium. So, I decided to try all 13 of them!

Moules – A popular main dish of mussels and fries! I tried this on my first day in Belgium and had it several times during my program.  I have even found a couple of places here in the US that do it justice!

Liege Waffles – Leavened batter or dough cooked between two plates with sugar crystals baked into it! You don’t need peanut butter or syrup, but they offer chocolate and Nutella on the side! 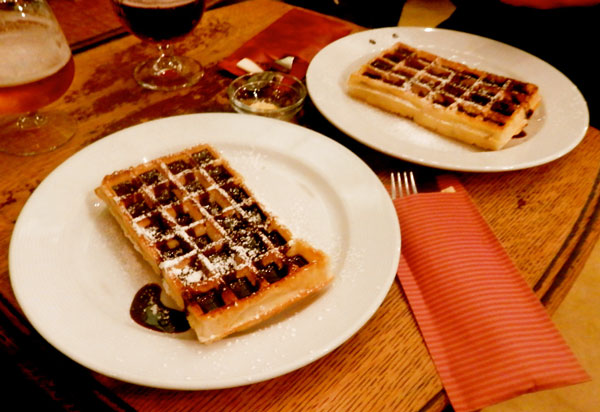 Frites – Fried with tons of sauce choices.  There are as many Fry Carts in Belgium as there are Taco Trucks in Texas! If you want Siracha Mayo, they have that.

Crevette Grise – Or as I call it, tiny creepy pickled shrimp!  They really aren’t as bad as it sounds but not one of my favorite foods that I tried.

The Beer – Need I say more?

Carbonnades Flamande – Beef and onion stew made with, you guessed it, beer.  This is my favorite dish that my host mother made.  I would also order it when she took me to dinner, but hers was better. It is comfort food to the max! 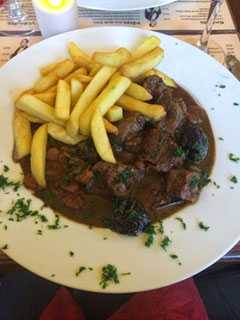 Speculoos – A spiced biscuit/cookie. The same cookie they now give you on airplanes.  It also comes in a peanut butter like spread.  They traditionally serve this cookie around St. Nicolas day in winter themed shapes.

Chocolate – An important part of Belgium’s economy.  ISA Brussels students even get to make their own!

Waterzooi – A rich fish or, more commonly, chicken stew.  I had the fish version at a café near my homestay and it was pretty good.  I much prefer the chicken version though!

Filet American – Almost the same thing as steak tartar.  It is very finely cut beef topped with sauce.  I was not very excited about trying this one so I ordered it on a sandwich. I surprised myself because it is actually very good!

Boudin Blanc – White sausage made with milk. Not to be confused with blood sausage.  My host mom would make this with an apple dish similar to apple sauce.  Of the sausages, this was the best!

Chicon Au Gratin – Endives, wrapped in ham, topped with a cream sauce and cheese.  This was another thing I was able to try at my homestay when Granny made it for dinner.  I had never had endives before and did not know what I was about to eat but it can’t be too bad if it’s covered in cheese, right?  Endives are very bitter but having the cream sauce makes them pretty good.

Want more information about study abroad programs in Brussels? Fill out the form below.