Throughout the month of May, as thousands of students graduate from college and move forward with their careers, ISA will publish a series of stories from ISA staff members about how their study abroad experiences laid the foundation for their time with the Peace Corps.

I’ve always been fascinated by exploration and had dreams of being an astronaut when I was little. When I went off to college, I realized that there’s an entire planet that I had yet to know and decided to study Anthropology. Through my studies, I had the unique opportunity through my university to spend a summer in Orange Walk, Belize on an archaeological dig. What a huge eye-opening experience! I spent three weeks living in a tent, hiking to remote parts of the jungle, uncovering potsherds (ceramics), and black obsidian (glass-like volcanic rock).

This wasn’t my first experience traveling, but it was my first experience really being on my own, in another culture, figuring my life out and what I wanted to make of it. While I was in Belize, I marveled at some of the students who were proficient in Spanish, speaking to the locals. I was minoring in Spanish, but I knew that I needed more time abroad to have a strong grasp on the language. I’ve never been one to do anything casually and without perfection. When I returned home, I longed for similar experiences and Peace Corps kind of fell into my lap as an opportunity. This was before I realized of the long, arduous process. But, I was determined!

I leaned on my experience through study abroad to show that I was capable of thinking outside the box and mentioned my experiences with local children in Belize, and how I enjoyed learning from them and sharing our culture. I had my heart set on Latin America, of course, but at the time, it was difficult to secure a place there. I was about to move forward with an application to Morocco, until they told me that I needed to have a French base, so it was back to waiting. They offered me a position in Turkmenistan, but I pushed for Latin America. I knew that it was where I was meant to grow, where I could make the most difference, where I already had a Spanish language base. I was so excited when they offered me Perú!

After three months of Spanish language training, living with a host family near Lima, Perú, I hadn’t improved in my Spanish language level, stuck at low intermediate. And, this concerned me. Of course, I had English to fall back on because I was in classes with other volunteers, speaking English at every opportunity. The moment that I entered in my community there was no English, none, nada. I was forced to use Spanish, and I was frustrated because I wanted to communicate effectively and not sound like a simpleton. I started conversing and playing games with the children of the community. They were so patient, they helped me, and they were so kind and sweet and interested in me, a foreigner. I also spent a good amount of time studying Spanish in my room, then practicing in the community. Two months later I can confidently say, I was fluent. I just needed a good kick in the pants. 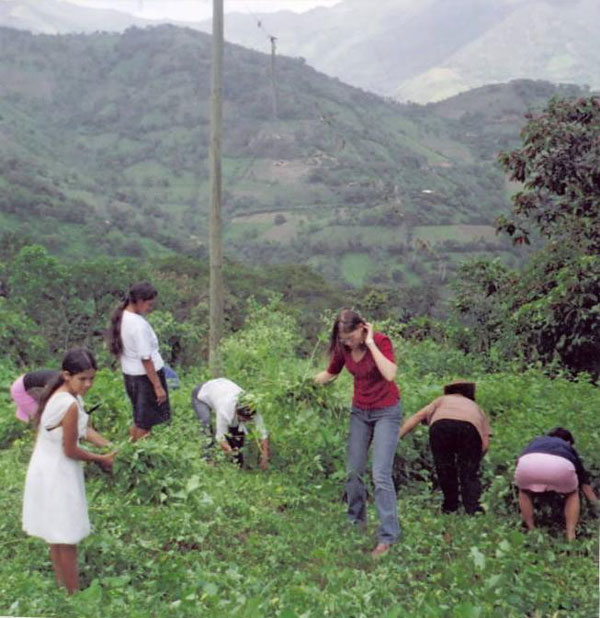 I think most people when they apply for Peace Corps want to make a difference in the community where they serve. And, you will, but you will also grow as much or more than the people you are serving. From the new experiences, the differences in culture, a new language, trying to make sense of it all, and going through the process with 30 others who are in the same boat; you’ll learn from each other, you’ll work together on projects, and you’ll also work with the people and a counterpart in your community. You’ll feel fortunate to have met these people on a part of the map so foreign, to know them as co-workers and friends, and that neither of you come out on the other side the same. And, you’ll learn that maybe it’s not a good idea to pull on a banana pod and carry a bunch of bananas with you several miles back to your house! I grew some huge muscles that day. You know, stuff like that, life lessons.

When it’s all said and done

I look back and feel grateful for that first study abroad experience in Belize, how it shaped my perception of the world, and my place in it. If you’re interested in pursuing a position with the Peace Corps, one thing that they don’t tell you is how it will affect you for the rest of your life. You can describe your experiences to others, but it’s a journey that you yourself went on, your experiences, your mistakes, your triumphs. And you will always feel that you have two homes, the home and culture that you grew up in, and the home and culture where you really grew.

If you’re interested in studying abroad, ISA can help you get started.